One of the hardest pills for my kids to swallow with the way that the school year ended was the fact that their field day was canceled. Thankfully, some very creative dads got together and gave us the chance to do an at-home competitive tournamen! Now, I’ll be the first to admit that I did not participate at the time because I did not rock COVID-schooling, but I’m excited to do it now that my kids are done with school and we can relax a little bit. I won’t even try to keep up with this guy, but I can still manage to have a pretty good time with our at-home games.

Just like you remember from grade school. Run as fast as you can down the track, launch yourself, and land. Works well if you have sand to jump into, but you can also mark lines on your grass with spray chalk.

Similar to the long jump, except you keep going. This event involves a hop, skip, and a jump and has been a part of the official Olympic Games since 1896.

No at-home Olympic-style games would be complete without an obstacle course! You don’t have to go out and buy the ninja-warrior sets (though my son would totally geek out if I did…), you can use things you already have laying around. Popular obstacles in our house: balance beam (or tape on the ground), hopscotch, something to jump over (like a pool noodle), something to crawl under (i.e., a tunnel), and things to run around. (You can buy traffic cones, but old milk jugs or 2-liters work just as well and if you put glow sticks in them, you can do this at night!)

If you’re a purist, you can measure out 50 yards on the street or sidewalk in front of your house. (For those of you who aren’t former math teachers, that’s 150 feet…) or you can just have the fam line up on one side of the yard and race to the other side. Do it all in one heat, or use the stopwatch on your phone. The choice is yours.

Choose your course–around the block or on one of the many trails we have in the area. You can hit up map my ride to see where others recommend you ride!

Every kid has a skill set, and areas where they aren’t so great. I encourage you to include contests that will both build up their confidence and frustrate the heck out of them because they aren’t in their wheelhouse. I want my kids to learn that they are not the BEST at everything while they’re young and an at-home competition is the perfect way to let them fail in a safe, non-soul-crushing way.

I know, I’m the first mom to shout “DON’T PLAY WITH YOUR FOOD!” but eggs are cheap and you can hard-boil them if you’re really worried about the mess. A large wooden spoon, a dollar’s worth of eggs, and you’re off to the races!

Play in teams of two. Start close to one another, and toss back and forth. Each time you toss it, take a step back. You’re out of the game when your balloon breaks.

A great game for any siblings who won’t stop arguing. This will force them to work together or risk falling on their faces.

I’ll admit, I was first introduced to this idea by a Brady Bunch rerun on Nick at Nite. If you can’t find a potato sack, old pillowcases work well for small people.

Remember that game show Minute to Win It? Well, I think any of their games are PERFECT for this, but cup stacking is one that lends itself well to little hands. And hey, if you use solo cups, you can pretend you’re back in college after the kids go to bed.

Don’t worry, moms and dads, this post isn’t sponsored by the emergency room. I’m talking about nerf arrows here. Set up a big target OR set up cans on a table to knock down. This can also be done with water balloons or balls.

Those 2-liters I mentioned in the obstacle course? Whip them back out. This time, set them up like bowling pins at the end of the slip and slide and let your kids go.

My favorite games are the winter ones, so I had to include a sport that’s usually played on ice in my at-home games list. Learn the basic rules of Curling and grab some brooms. Perhaps one day, your kid will be on their way to a gold medal! (or at the very least, learn how to pick up a stinkin’ broom…)

You can get creative with this one. Beginners can just dribble in a straight line, others can be forced to switch hands halfway through, loop around a cone or chair, or do around the world and eights around their legs.

Have you hosted an at-home Olympic-style games? Did you include any events we left out? 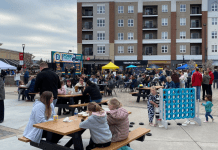 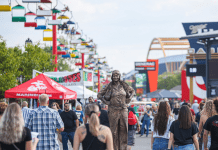 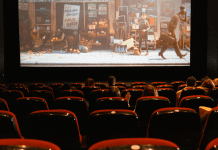