A while ago, at school, another mom was talking to me about how our kids love playing together (awesome!). Then, in front of both of them, she said something along the lines of how adorable my daughter is and threw out the word “girlfriend” in a definite relationship connotation. I’m pretty sure my eyes went wide when this was said. I followed up with a “Yep, they are definitely great friends” and tried to leave it at that but I did not like the wording used. My four-year-old daughter does not need a boyfriend.

That got me thinking. Why do we, as parents, feel the need to add an asterisk or contingent to a young child’s friendship? Young children like to play with other children regardless of gender. All they know is they like having fun with this person. Adults do not need to put a label on a child’s friendship that, as an adult, has romantic implications. My four-year-old daughter doesn’t need to worry about friendships having a label and she definitely doesn’t need a boyfriend. 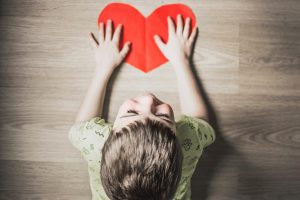 Now, truth be told, my daughter has commented on getting married/having a boyfriend in goofy pretend terms. She is aware of boyfriends/girlfriends from witnessing other friends and family members having these relationships. She sees these relationships as adult things, though. When she is playing house or something similar, that’s when she pretends and uses these terms. Now, after hearing another adult say this about her, she has asked me if her friend is her boyfriend. I simply explained that no, he is a friend who also happens to be a boy, and it is awesome that she has such a good friend. Again, she’s four, so that answer worked for her.

I might be overthinking this, but in this world of cell phones, the internet, and the hyper-sexualization of kids, I feel like this is just the beginning. Changing this small saying of “boyfriend/girlfriend” to describe childhood friendships helps to curb the impending fact that kids grow up too quickly. Also, I think having age-appropriate talks with kids about friendships now starts the eventual conversations around broader topics of relationships as children get older. To the Mother of the Spirited Child- Part 1: You Are Not Alone The Importance of Black Barbie