“Do your kids have cell phones?”

This is a question that comes up in a lot of parenting groups I’m a member of. There is a mixed response of He*l no and, yeah, they’ve had them for years. I’m the latter. My kids have had cell phones since we moved to Wisconsin in 2014. They were in first and third grades. At the time, they shared one old school flip phone.

My husband and I were on the fence about whether we should let our kids have cell phones at such a young age, but ultimately decided for it because we no longer had a land line, and, in the event they needed to contact someone and we weren’t around, they would have the phone and know how to use it. Additionally, at that time, we moved to a new neighborhood in a new state with people we didn’t know. There were kids on our new block and we wanted them to have the experience of going outside to play. Long gone are the days of the dinner bell, and no one else has land lines either, so a cell phone was the easiest and safest way for us to keep track of them.  Our decision was affirmed when one spring day my youngest fell at a neighbor’s house and broke his arm. The parents didn’t hear him screaming and my daughter called me frantically. I was able to get to him quickly and take him to the doctor where he had surgery and fancy pins to put him back together.

Fast forward a few years and they were upgraded their own iPhones. Now that they are older, there are more rules associated with our kids having cell phones. 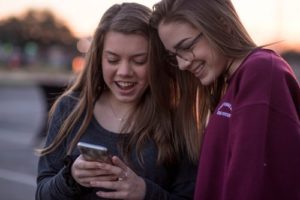 Letting kids have cell phones is a big responsibility and it is very easy for them to find themselves in situations they are not socially ready to handle. Twice this year, I had the unfortunate experience of meeting fellow parents because of bullying situations that happened over text. The good thing is, it’s much easier for us to see what’s happening and to support our kids than it was when we were kids, because with technology and devices, there is proof of the bullying. But the proof is only helpful when we look for it.

The bottom line is what is right for my family may not be right for yours. Don’t allow what one parent choses to do with their kids influence your actions with your family. Our kids shouldn’t have phones just because all their friends do. If you do let your middle school kids have cell phones, please make sure you’re aware of how they’re using it.

Do your kids have cell phones? What challenges have you faced with this technology in your families?