As we slowly go back to normal, we thought we’d try a new experience. My son MJ had recently seen A Knight’s Tale and has become enthralled with knights tournaments, so we decided to take him to Medieval Times.

Medieval Times is located in Schaumburg, about an hour from our house in Milwaukee. Currently, you must purchase your tickets in advance on their website. Prices are $63.95 for adults and $36.95 for kids 12 and under. This includes your meal and 2 non-alcoholic drinks, and the show. There is almost always a discount code on their website, or one can be acquired by joining their mailing list. We used one to save 25% on our tickets. We did upgrade to the Queen’s Royalty Package and pre-purchase slushies that came in souvenir cups for the kids.

The Queen’s Royalty Package includes Priority Castle Access (though at this time, we didn’t notice a difference due to COVID procedures), VIP First row seating in all sections or second row in the center section, priority seating access, cheering banner, VIP lanyard, and a framed group entrance group photo.

The castle opens 1 hour before the start of the show, and as seats are assigned based on arrival time, I suggest you arrive when the castle opens. The line moves rather quickly, with groups spaced 6ft apart as we moved through the line to check-in. We were given our table assignment, which determined which knight we would be cheering for, and our VIP lanyard. We then were given our crowns that matched the black & white pattern of the knight we were assigned and took our group photo. The best part was the theming, including the staff that all used medieval accents. 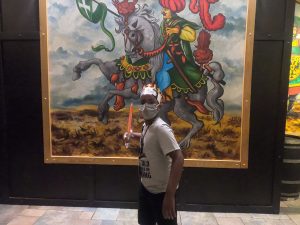 Before the show, you can wander the great hall, have a private knighting ceremony, buy some surprisingly reasonably priced light-up swords, and wave at the queen. You cannot, however, purchase anything to drink at this time. Instead, you have to be in your seat and wait for a bartender to come to you for a beverage. This is any drink that isn’t one of the sodas offered as part of your meal.

After purchasing some souvenirs for the kids, we entered the arena and were surprised to find we were seated front row center. Your server is either referred to as a serf or a wench throughout the tournament, depending on gender. Our serf Daniel asked us what we wanted to drink, but we could not get our slushies from him or any adult beverages, just the soft drinks that came with the meal. There is no menu to select from. Everyone receives the same exact meal, including portion sizes: soup, bread, a quarter chicken, corn, and potato.  If you are a family with food allergies, pleasebe sure to call ahead. The food was surprisingly good. I went in expecting bland, low-end banquet food; however, the chicken was surprisingly juicy and well seasoned. Food is served hot. Remember you eat with your hands. (if that’s something you’re really against, you can ask for disposable flatware). Don’t forget to tip your serf/wench, and don’t worry about cash. You can use Venmo. 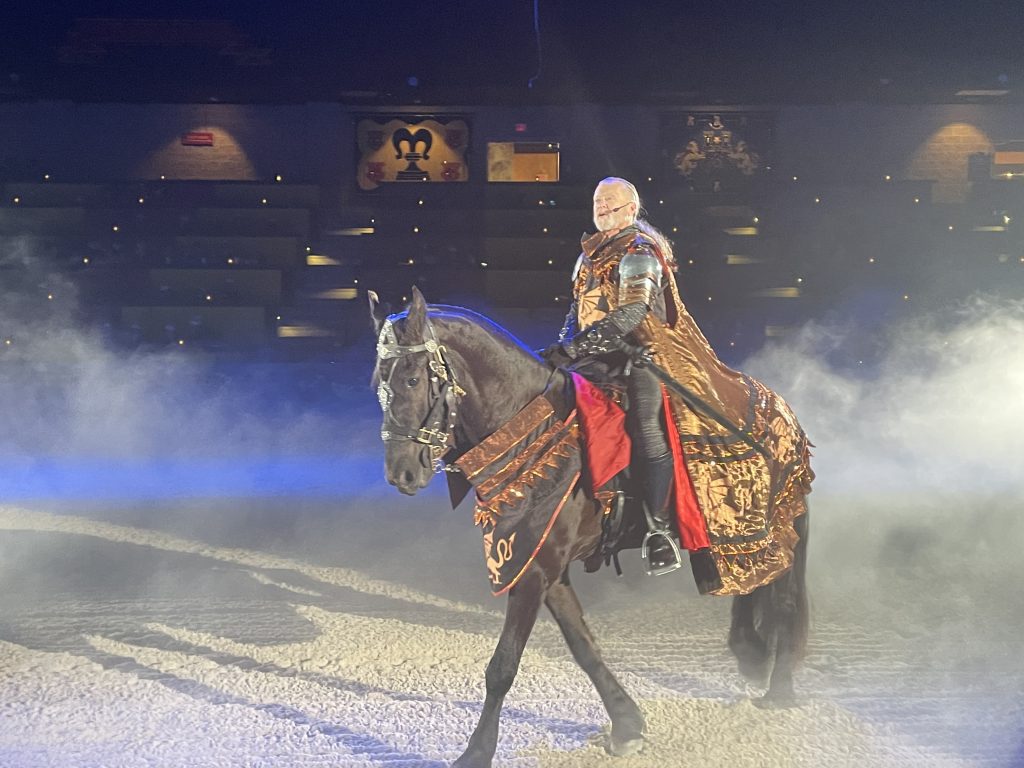 Your meal is served in courses throughout the Medieval times tournament. After the soup course, the knights are announced. It was incredible to be so close to all the action. The tournament includes horsemanship, falconry, weaponry, and jousting. Each section was engaging, exciting, and at times suspenseful. The knights would engage with the audience throughout the tournament, including selecting a fair maiden to present with a flower. My son’s friend who joined us was selected to receive a flower, and the grandiose gesture he made in having the wench present it to him was adorable. 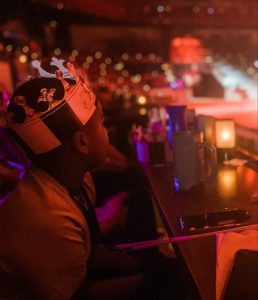 We were most excited for the combat portion, which included jousting and weaponry. This is the most exciting and, dare I say, the most dramatic portion of the tournament. This was what my son had been waiting for, and it did not disappoint. They lower a net for this event to prevent pieces of lance from flying into the audience. While our knight won his combat part, he challenged the Green Knight after. Sadly, our knight was defeated by the Green Knight. I was surprised by how invested I became in the tournament. I was screaming and cheering just as loudly as the kids in the arena. 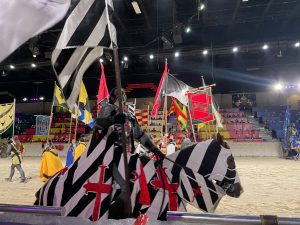 After the Tournament is over, they are currently dismissing people by rows and sections, so we were among the last to leave.

The only issue we had was with redeeming our tickets for the slushies. Don’t waste money on them because only one person per area is running bar service. After 45mins in our seats, our bartender finally visited us–right in the middle of the opening ceremonies–which was really frustrating. We were, however, approached by people walking by selling light-up toys a million times as you would expect at a tourist destination.

Have you been to Medieval Times? What do you have to add? 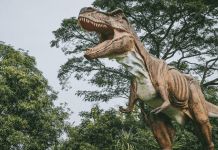