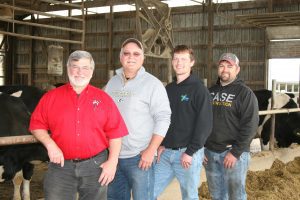 “The event is designed to connect consumers and farmers through an exceptional on-farm culinary experience,” said Kari Blazei, Wisconsin Farm to Table Committee Chair. “Guests will explore the taste of Wisconsin’s agricultural diversity from prestigious cheeses, meats, vegetables, and beyond.”

The evening’s creations will be prepared and presented by Chef Chanse. From humble beginnings of washing dishes at the age of 15, he quickly climbed the ladder and became executive chef at the Central House in Chilton at the age of 23 years old and only after three months, he purchased the Central House. Four years later, he embarked on a new venture when he opened a banquet hall at the Juneau Community Center, which he has owned for 12 years. He then became a Corporate Executive Chef for three years, and then returned to the Community Center where his creativity as a chef continues to thrive. Chanse enjoys teaching at cooking schools and is a very experienced watermelon sculptor as he has carved over 1,800 unique watermelon sculptures! Not only does he love food, but he loves the variety of people that food has led him to in his career.

Mighty Grand Dairy was formed in 1997 when three neighboring dairy farm families decided to join their assets together. The three neighbors included Myron Daniels, Gene Weis and Dave Daniels. In 1997, they had 300 cows and grew the land base to 700 acres. Today, they farm around 1,000 acres to grow feed for 560 dairy cows and 500 youngstock. Gene has since retired from the operation, and Dave and Kim Daniels remain active along with Myron and Doreen Daniels, their son, Chad, and their nephew Nick and his wife Stephanie, who are the sixth generation on the farm. With an eye on the future and a drive to be more sustainable, Mighty Grand Dairy installed solar panels on the farm in January of 2021, which is able to provide nearly 80% of the farm’s energy needs.

Proceeds from the Wisconsin Farm to Table dinner go towards a charity of the host farm’s choosing. This year, Mighty Grand Dairy has chosen the Kansasville Volunteer Fire Department.

The Farm to Table dinner begins at 5:00 p.m., with farm tours and cheese reception with music entertainment. The catered dinner begins at 6:30 p.m., complemented by a program featuring the local farmers who helped provide the evening’s fare.

For more information and to secure dinner tickets, visit www.wifarmtotable.com, call event contact, Kari Blazei, at (262) 203-4016, or email [email protected] The event is limited to the first 100 guests. Those interested are encouraged to purchase tickets early.

Wisconsin Farm to Table is a non-profit event organization established in 2013 to offer an on-farm experience, with a farm tour, elegant dinner and dialogue between those interested in agriculture and where their food originates. Money raised from annual event is donated to a local non-for-profit of the host farm’s choice.