I’m a mom. Why bother with makeup?

I’ve never been particularly gifted at self-beautification. Imagine one of those meticulously coiffed hairdressers who work the chairs at the salon you can’t really afford to go to, with their chic black tunics and flawless 2 p.m. smokey eyes. Now imagine her sweaty, frustrated sister who looks like Mufasa every time she tries to tease her mane into a bumped ponytail. I’ll let you guess which one I am.

Throughout high school and middle school, I wore make-up daily because everyone else did. In college, I went through a slothful period that I tried to disguise as militant feminism (“If boys don’t have to wear makeup, why should I? AM I RIGHT, LADIES?”) but eventually went back to daily use because I simply felt naked without it. I’ve never been accused of being particularly good at it, and for really important occasions I turn my face over to the expert hands of my mother and sister, for whom makeup is literally a way of life.

Since giving birth almost two years ago, I’ve gone without makeup more days than I’ve bothered to put it on, simply because my daughter is one of those kids that will not let me do anything unless I’m holding her in my arms. I really only wear it for church and on days I have to work outside the house, so I don’t scare off potential clients with my patchy, dry Irish skin.

But recently, my mother gave me a sampling of makeup she had bought and couldn’t use. It was really nice stuff, premium brands, and as I held the little boxes in my hands I just felt like such a girl again. It all just seemed so fun. The pretty colors! The soft brushes! The shiny little bottles!

I started putting it on in the mornings without any real concern for the hows or whys of it all – I’m not one of those people that can sit through a Youtube tutorial. I smudged the foundation around my face and set it with some powder and played with the fun little pots of eyeshadow and experimented with the highlighter (what even is that? I don’t know, and I also don’t care. But it’s on my face right now and it feels pretty glorious).

And after a few days I realized that on the mornings when I chose to spend a few minutes in front of the mirror actually focusing on my appearance, I felt more relaxed and more in control. It turns out–

I am a mom and I really like wearing makeup.

It makes me feel good – not beautiful. Good. Ready. Capable.

With some mascara and a little lip gloss, I cruise on into Aldi with a fussing toddler and a full datebook feeling like Eleanor of Aquitaine. Come at me, day. I’m ready for you. I’m wearing eyeliner.

I stopped wearing makeup because it had become about pressure – the pressure to feel presentable and acceptable and beautiful, and I just couldn’t take it with all the other things I had going on in my life as a young mom. I knew I was acceptable without makeup, so why waste time on something that doesn’t matter?

Well, because if it makes you feel good, then it does matter – not to anyone else, but to you.

And yes, my daughter has capitalized on my new five-minute morning hobby to scour the floor with her toothbrush while singing “Ee-ya, ee-ya!” (clean-up, clean up!). But that’s what rubbing alcohol is for. Mom’s wearing makeup. She can handle this. 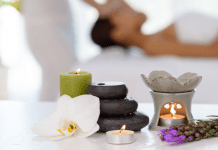 Guide to Spas, Salons + Self-Care | In & Around Milwaukee, WI