Does anyone else still play cards?

No, not that game of Solitaire you have on your phone. I’m talking actual physical cards, all 52 of them.

On our date nights in, my husband and I often pull out a deck of cards and our Cribbage board. We can spend anywhere from fifteen minutes to hours playing Cribbage. The conversation flows from discussing our cards to remembering previous games we’ve played, to just catching up. It’s quality, technology-free time together. 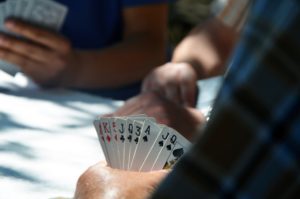 Like me, my husband grew up playing cards. While my family loves Cribbage, his family is heavily invested in the art of Sheepshead. From the moment we started dating, it was a topic of conversation. It’s a way to draw people to the table, to draw out the discussion. Honestly, Sheepshead is not the game for me, but there are many other card games to check out.

Here are some of the basics on my favorite card games:

While my children are too young to play my favorite card games, I look forward to passing down the tradition of playing cards to them as they grow up. Until then, it’s Go Fish and 52 Pick UP.