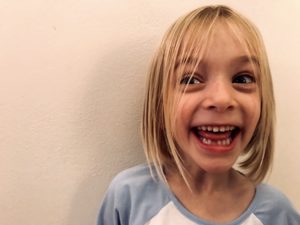 My six-year-old daughter is a funny girl. She makes silly faces, she does wacky voices, she improvises goofy songs. She learned a knock-knock joke recently and told it to me during breakfast one morning. It’s an old one that you’ve probably heard before:

“Lettuce in, it’s cold outside!”

I laughed, of course, because that’s what you do when a kid tells a joke. She laughed too, and then she tried to write her own knock-knock joke on the spot. Here’s what she came up with:

“Lettuce in, there’s a butt outside!”

That time I laughed for real. I mean, that’s a funny joke, whether or not she fully understood why.

Yes, sometimes her jokes involve butts. Sometimes they involve farts, too. She’s six, so whatever. I don’t tell her to stop, and you know why? Because she’s funny, and she needs to know that funny girls are awesome.

When I was a kid, it always seemed like boys were allowed to be loud. Girls, though, were supposed to act like ladies, and being loud doesn’t fit that mold. That’s why we need to encourage funny girls. They might need some help breaking that mold, and they don’t get much encouragement elsewhere. Look at any Disney movie. The boys can be funny. The girls are princesses.

There are several reasons for this imbalance, but let’s focus on one reason for now. Set aside the lead characters, the romantic interests, and the villains.

In every Disney movie I can think of, what do all the comic relief characters have in common? They’re all male.

And comic relief characters never shut up. Pumbaa and Timon from The Lion King. Iago and the Genie from Aladdin. Scuttle from The Little Mermaid. Lefou from Beauty and the Beast. Sure, Anna and Elsa are strong, independent, well-rounded women capable of both tenderness and adventure, but it’s Olaf who gets the laughs.

So, yeah, women are funny. Funny girls rock. Let’s remind our girls of this and let them be as silly as they want.