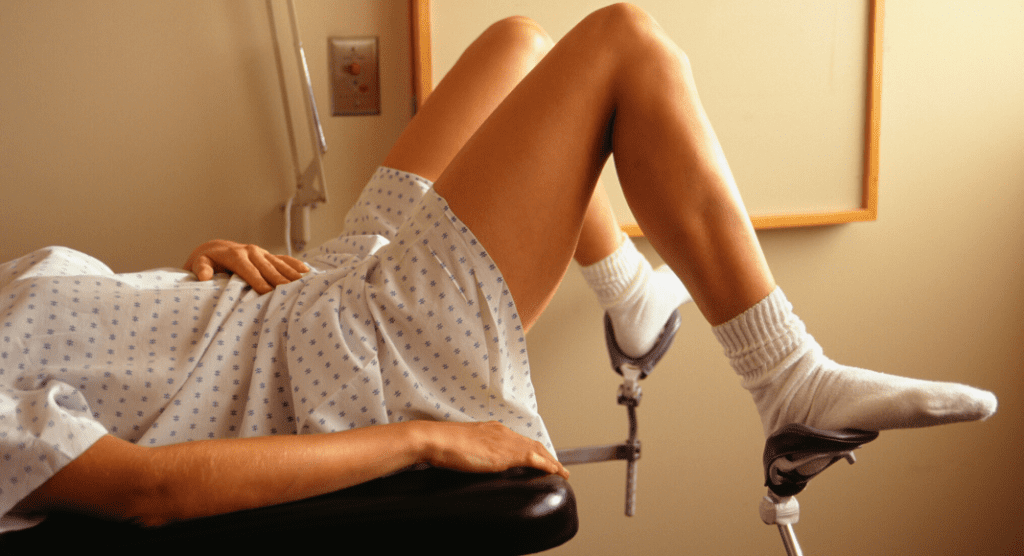 Dear Moms of the Interwebs,

This is a true story, I swear to you. I am writing it anonymously mostly to protect my someday teenage children from the humiliation of Googling their mother’s name and finding a horror story about her vagina from 2016, which would lead to abundant bullying and inappropriate “yo mama” jokes.

This is the story of a pelvic exam gone horribly wrong.

Have you ever purchased a box of the crap cereal for your kids simply because there was a toy inside they wanted? I know I have certainly fallen prey to the lure of the prize inside the box. At least when you open up the box of Lucky Charms and start digging around until the marshmallows make your hands all sticky, you do so with the intent of discovering this promised trinket.

Let me tell you a story about another prize inside a box that was a bit more….unexpected.

But first, a little background. I have three children. They were all planned for and purposefully conceived and are each conveniently spaced about two years apart.

My youngest kiddo is now four years old. This will be important later, I promise.

In between pregnancies with my kids, I used the NuvaRing for birth control. It was pretty simple — you insert the silicone ring and leave it for three weeks while it releases a hormone to prevent pregnancy, then remove for a week. Repeat with a new one.

After my youngest child was born, I knew right away that I was ready to board the No More Babies Express and get a more permanent birth control solution, so at my routine 6-week postpartum checkup, my sweet OB inserted a Mirena IUD.

Now, for those who aren’t familiar, Mirena is a tiny little t-shaped device that is inserted into the uterus and releases a low, yet constant stream of hormones for a 5-year period of time. Basically, it’s the crock-pot of birth control. You get it set and then you forget about it for 5 years while you get 99% effective birth control along with the delightful side effect of not getting a period, which means no messing around with tampons, pads or any of this Diva Cup nonsense. Bliss, I tell you. BLISS. (Not a sponsored post for Mirena, I promise.)

Anyway, I went about my business for the next several years, including the “Adult Time” that marriage typically entails, the annual visits to the doctor to shake hands with the speculum and so forth. We even moved away and I started seeing a new doctor for a couple years. Right at the four-year mark of my Mirena’s tenure in my uterus, my husband’s insurance changed and we had to completely switch providers. I started my hunt for a new OB/GYN since I knew I would have get a new IUD inserted before too long and I wanted to make sure we were at least on a first-name basis before that appointment rolled around.

So there I was, waiting to meet my new doctor like it was a lunch date via Tinder. I had even shaved my legs for this. We chatted about the usual things – medical history, birth control, and the guarantee that she would NOT accidentally artificially inseminate me like on Jane the Virgin before I hopped up in the stirrups for a standard examination and pap.

There were two nurses in the room who were assisting my new doctor in the procedure, handing her swabs and such while we went through the usual song and dance around my lady parts. It was when she had pronounced things “done” that I said something that would change everything —

Can you please make sure the Mirena is still where it should be?

She gloved up, got some fresh Astroglide on her fingers, jumped back in there and starting rummaging around like Mary Poppins digging through her carpetbag for the magic tape measure.

Eventually, she made a small “a-ha” sound, emerged from between my legs and held aloft a NuvaRing she had just extracted from my nether regions, staring at it as if she had just found that long-missing sippy cup of milk in the bin of Barbies.

My jaw dropped and my eyes grew wide as I stared at the now blackened (yes, I said blackened) silicone ring this person I had just met 8 minutes earlier held aloft. Quickly, I did the math in my head and came to the horrifying realization that the relic she had just pulled out of me had been inside my body for a MINIMUM OF FIVE YEARS.

I had not used a NuvaRing since we had started trying to conceive our youngest child. Who is now FOUR YEARS OLD. And this woman had just discovered one that had practically fossilized in my vagina.

Of course, this situation brings up the obvious questions ::

I couldn’t believe it.

In my panicked phone call to my husband following the appointment where I explained my humiliation in gruesome detail, I presented this burning question:

How did you not feel it in there for so long? I just can’t figure out how nobody knew it was in there!

There was a pause before he replied, “Well, I did feel something.”

“I didn’t think anything of it because I thought it was that Mirena thing you had put up in there!”

But that’s in my UTERUS!! And how long exactly? How long exactly did you feel this foreign object inside your wife and not say a single word about it?

So, if you see a news bulletin about a woman suffering a psychotic break and murdering her husband with a speculum, I think you’ll understand the motive.

P.S. For those of you who may be concerned for my health after this debacle, let me assure you that the only thing infectious in this scenario was the laughter that came from each and every one of my BFFs when I called them after The Ring Incident.

P.P.S. I realize this all seems a bit sensational. So, to corroborate my story, I give you Exhibit A — a screenshot of the texts with my husband. And yes, I did show him ANOTHER diagram later. So Have I For You – My Journey Through Interracial Relationships Being an Asian Adoptee in America Today Read with Pride | 100 LGBTQ Books for Adults and Kids