By all counts, I should have 13 children.

In the last six years, I’ve had ten miscarriages — and they’ve come in all shapes and sizes. I have two healthy boys and I’m pregnant now, nearly 17 weeks, and for that I am incredibly grateful. But it hasn’t been an easy road. Pregnancy after loss isn’t always as joyous as should be. In fact, it’s nerve-wracking.

And I’m not sure the nerves will settle until there is a tiny human covered in vernix resting on my chest.

Pregnancy after loss is a different kind of experience. If you’ve been here, perhaps you understand this all too well. If you’ve not, know that at least 1 in 4 of your friends probably has. Miscarriage is common, more common than we like to talk about, though thankfully that’s changing.

Here’s what it looks like for me this time around:

I pee on a stick a few days before my period is due (Because when you buy the cheapie pregnancy tests from Amazon, you don’t feel bad using a few of them early. And if you’ve been trying to make tiny humans for seven years, you’ve got a big supply of these sticks in your bathroom). The line is dark right away, but even then, neither my husband nor I get too excited. We’ve been here before. I don’t even bother going in for HCG or progesterone level testing this time, if it’s going to stick, it will stick. If it’s not, knowing the numbers won’t really make a difference.

I don’t tell anyone I’m pregnant. Instead, I look for blood every time I wipe, waiting for it to come, as it has so many times before. This unfortunate habit will likely stick around until the baby is born. Unnerving as it is, I can’t help it.

When I finally do see the midwife for the first time, I’m on pins and needles. I remember the last time I was in her office, the time she couldn’t find a heartbeat and sent me to the ultrasound technician for confirmation that the baby had indeed died weeks earlier. I half expect the same outcome, but I’m pleasantly surprised when she finds the heartbeat right away. My next appointment, four weeks later is exactly the same, nerves still on high alert. Will my next appointment at twenty weeks be any different? I don’t expect so. There’s always the lingering fear and mistrust of the process and my body. Meanwhile, the nausea hits hard, which makes enjoying this baby nearly impossible. My three-year-old notices observantly that I stay in bed all day, and compares me to Mitchell the mailman in “No Mail For Mitchell.”  I just about muster the energy to get my two boys to school before I come back and collapse until pick up.

Around sixteen weeks, we begin telling friends and family. Though I know I should be grateful for all the well wishes and congratulations, instead I wonder whether I am jinxing this pregnancy. We tell them not with the wholehearted “WE’RE PREGNANT!” but with the lowercase caveats attached: the ones about “touching wood,” “hoping this one sticks,” and “keeping fingers crossed.” I make a mental list of who I’ve told so I know who I will have to “un-tell” should anything happen at this point. I try not to imagine the disappointment and sadness of what that would feel like, again.

If I sound like a Debbie Downer, forgive me. I know I should be grateful and excited and relieved. But I’m just being honest here, because what I really am is nervous and scared. And you know what? That’s okay too. Because it’s real. Mothers get told enough how we “should” feel. We have enough guilt. And I think those of us who’ve experienced miscarriage carry even more guilt. So I’m choosing just to let that go right now.

Thankfully, my nausea is lifting and I’m seeing the light at the end of the tunnel, otherwise known as the first trimester. I think I felt the first kick last weekend, and my appetite is returning to normal (instead of eating anything and everything in sight, especially if it’s fried). This pregnancy is starting to feel legitimate, like this rainbow baby just might stick around.

Is it still scary? Heck, yeah. But just like my fears, I keep reminding myself, this pregnancy is real. My five year old has stopped asking me whether this baby is going to die in my belly and instead has taken to giving my belly nightly kisses and reminding me which toys the baby can and cannot play with upon arrival. We ask the boys whether they would prefer a sister or a brother and what we should name it in either case. “Let’s call it ‘Poopy,’” my three-year-old says and then giggles hysterically when I humor him with some silly, poopy, baby-talk.

So, still scary? Yep. But it’s happening. And that makes me happy. Even if I’m still cautious. 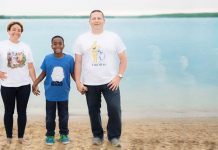 Late-Term Loss: A Letter to My Triplets