Middle school was hard for me. It was quite possibly the most miserable two years of my life. Kids were mean, I was awkward, and the transition from my small elementary school to a medium sized, two-story school with lockers was rough.

I had no idea how hard middle school would be as a mother.

This year, my oldest transitioned to 6th grade, aka middle school. We were both excited and anxious about the changes.

I know I’m biased, but my boy is a pretty amazing kid. He has a hilarious sense of humor. There are so many times he’s caught me off guard and belly laughing. He has more empathy than I’ve ever experienced in a twelve-year-old. At the age of four, he told me that he has super power – he knows what other people are feeling. And I have to agree with him on that one.

I could go on and on … but what you need to know is that my son, my brand new middle school student, is freaking amazing, but he’s not like the other boys. He’s not super into sports and he’s a bit sensitive. He loves video games but is a bit awkward. He can make anyone laugh but often crosses the line. 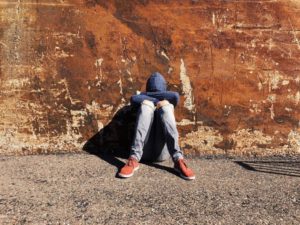 So when he started having issues with other boys at school, my heart broke. I immediately questioned my parenting, feeling as though I had let him down. Maybe I hadn’t been hard enough on him to toughen up. I didn’t teach him “bro code.” The blame and guilt of my failed relationships bubbled up. This pain obviously has to do with my own failures as a mother, because a real mother would have protected her son from this kind of pain. Right?

I was at a loss of how to help him but the truth is…middle school is just hard.

Here’s the thing…kids are mean (just like adults can be, too). Middle school kids can be even meaner. And right there in the car on the side of the road, with my sweet twelve-year-old son crying, telling me about how a good friend had joined in on the name calling, I vowed not to let some mean middle school boys destroy my freaking amazing son, nor would I allow it to endanger my parenting. Exhale; I’ve got this. I can do this middle school parenting thing.

Middle school is filled with awkward kids. I was one of them back in the day. So I encourage my son to find other kids like him. Seek them out in gym class, in the lunch room, on the bus. Find someone that was kind and nice, just like him. I mean, we weirdos have to stick together, right?

So far, it seems to be working. While I’m sad to see some long relationships from elementary school start to fade, I’m encouraged that he’s found some other awkward, sweet friends in middle school.

Who knew middle school could be so hard the second time around? Two Edmunds: Fitzgerald and Lewandowski- Their Marks on Milwaukee