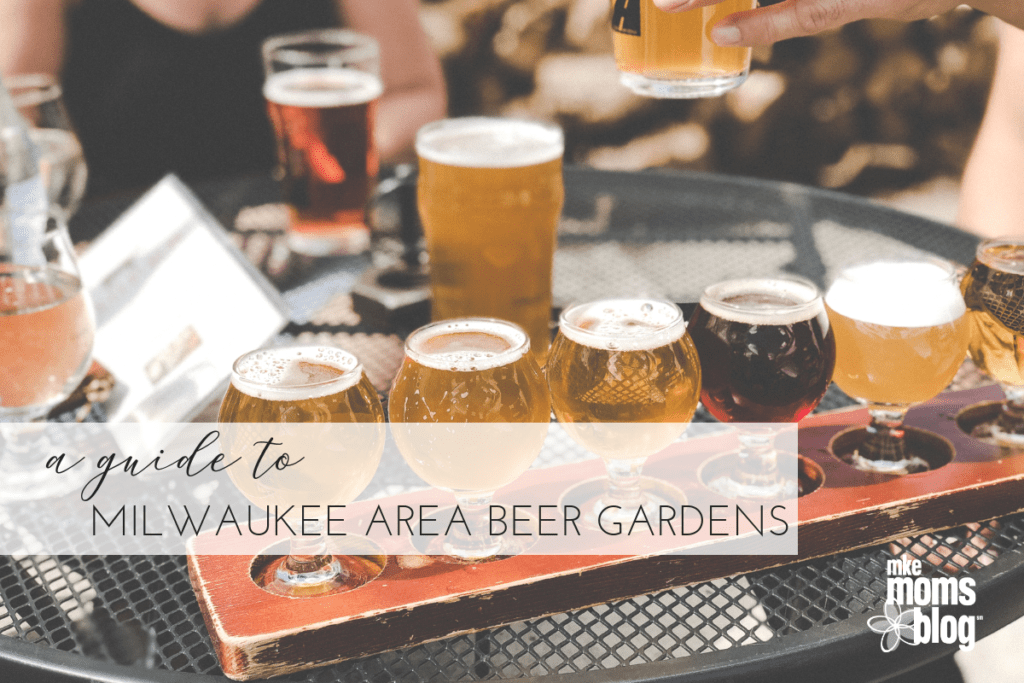 Summer in Milwaukee wouldn’t be complete without a guide to Milwaukee area beer gardens. Whether it is kicking back with a Cranky’s Pizza and a pint at The Landing, running a 5K and celebrating with a brew at the Traveling Beer Garden 5K series or enjoying the Lake breeze at South Shore Terrace, Milwaukee has the perfect family-friendly beer garden for everyone. So kick back, grab your pint, and enjoy a healthy dose of gemutlichkeit this summer. Here’s our guide to the 2019 beer gardens of Milwaukee. Prost!

One of the largest beer gardens in the state, offering multiple food items, as well as snack items. In addition, carnival rides will continue to operate on weekends, through Oktoberfest. Wear your Tracht (leather for men or Drindl for women) to the Bavarian Bierhaus and you’ll get half off your beer! Open from 5PM to 9PM on weekdays and noon to 9PM on weekends. Grab a beer and sip it along-side the grizzlies in the “Bear Garden” beer garden at the Milwaukee County Zoo. An ode to Wisconsin’s outdoor lifestyle and our Milwaukee German heritage, this beer garden is a family favorite, complete with family-style seating and a deck overlooking the lake. You can choose from 12 different rotating taps and they also offer floats for adults or kids.

Known as Milwaukee’s “official” living room, this new beer garden is located in the new Deer District at the Fiserv Forum. The Beer Garden offers a variety of taps that are constantly changing out and include local favorites and domestic drafts. While you sip on your favorite local craft, you can catch any Brewers or Bucks game on the big screens – which is found in a covered family-style seating area. They also offer a shuttle to Miller Park for home games. The Beer Garden also features yard games and is hosting free weekly concerts on Wednesdays during the summer! 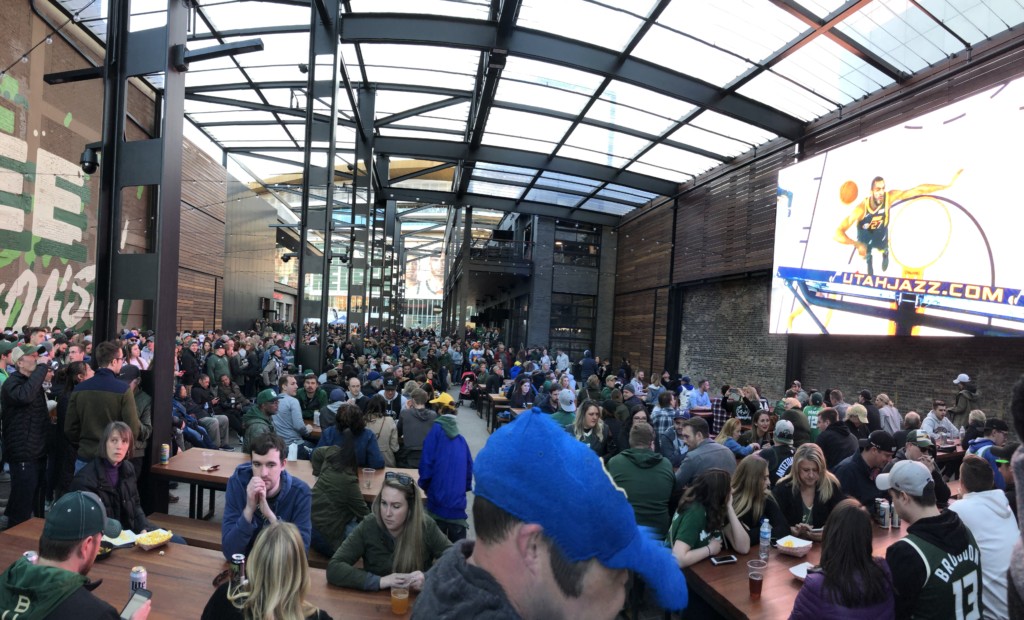 If you’re looking for a stellar local brewery with its own beer garden, Eagle Brewing is what you’re looking for. Featuring a large outdoor beer garden for up to 90 people, Eagle Park Brewery is open Tuesday through Thursday 3PM to 10PM, Friday 3PM to midnight. Saturdays 11AM to midnight and Sundays 11AM to 7PM. They offer up to 20 tap beers and an extensive menu of burgers, BBQ, ramen chili and hops seasoned wings.

Only in Milwaukee would one of our beloved parks carry the honor of having the first public beer garden in the U.S. since Prohibition. This beer garden is situated on a bluff just above a waterfall that flows into the Menomonee River, allowing guests to arrive via foot, auto, bicycle, or even canoe or kayak. They feature beers imported from the Munich Hofbrauhaus, along with brats, hot dogs and freshly baked soft pretzels. The beer garden is open daily from to noon to 10PM with last call at 9PM The Franklin Beer Garden at Croatian Park is perfect for any Thursday night in summer. This Croatian beer garden is unlike any other in the Milwaukee area. They feature their very own craft beers called Croatian Park Ale and Karlovacko Pivo (imported Croatian beer), along with a rotating selection of Wisconsin and Croatian craft beers. Make sure you also check out this beer garden hungry because they have a huge selection of food items, including handmade beef and pork sausages, Ćevapčići. The garden is only on Thursdays from 5PM to 10PM from Memorial Day to Labor Day. 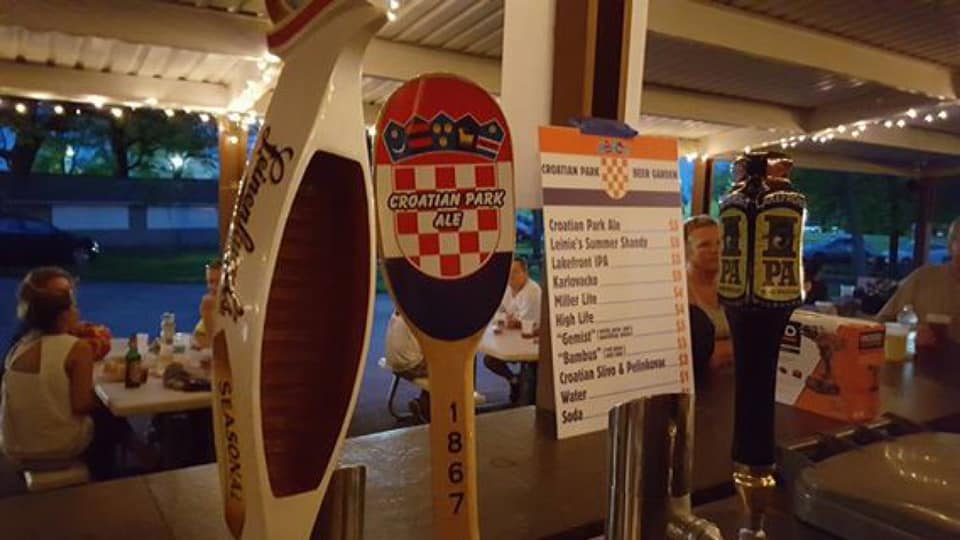 Returning for another year, featuring draft and packaged beer, wine, soda, pretzels and brats. Games like cornhole and giant Jenga are also available. Open beginning May 28 through Sept 30, from 4PM to 9PM Thursday and Friday, and 12PM to 9PM on weekends. The best part about the Hartland Beer Garden…it’s located right next to the splash pad! So, grab the kiddos and check this one out.

Located in Shorewood along the Oak Leaf Trail, Hubbard Park is a traditional Old World Beer Garden and features local beers, a bloody mary, wine, non-alcoholic drinks and summer food faire like brats, hot dogs, sausages and giant pretzels. Hours are Monday through Friday from 3PM to 10PM and Saturday and Sunday from noon to 10PM. One of the newest beer gardens in Milwaukee Co, is located in the heart of the Bay View neighborhood and is commonly known as The Vine Humboldt. They will have beer and wine on tap Tuesday through Friday 5PM to 10PM and Saturday, Sunday and Holidays 11AM to 10PM (last call at 9PM). Their tap selection will include two red wines, three white wines and craft brews from Lakefront Brewery, Sprecher Brewery, Terrapin Brewery and rotating guest breweries. They will also have hard sodas, cider wine and non-alcoholic  beverages. Triciclo Peru will offer authentic Peruvian empanadas made from scratch.

Adjacent to Hoyt Pool, The Landing offers both indoor and outdoor seating and features a rotating menu of craft and import beers, wines, non-alcoholic drinks. Their food selection includes Cranky Al’s pizza, giant pretzels, brats, hot dogs, and popcorn.  A schedule of live music is posted on their website. Hours are Wednesday through Friday from 3PM to 9PM and Saturday and Sunday from 12PM to 9PM. 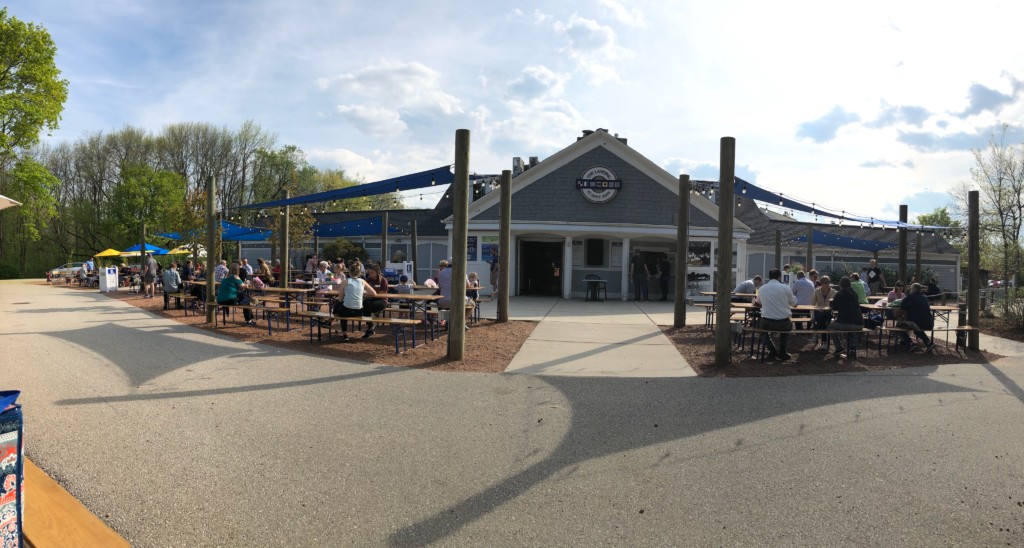 South Shore Terrace is a unique Milwaukee beer garden destination, complete with Lake Michigan views, farm to table food and exclusive Miller beers. The beer garden features gas fire pits, a cedar pergola, two stamped concrete stages and a huge 30-foot concrete and cedar bar with 20 tap handles. Limited concessions are also sold. There’s live music every Wednesday from 5PM to 8PM. Hours are Wednesday through Friday from 4PM to 10PM and Saturday and Sunday from 11AM to 10PM with last call at 9PM.

Each Thursday from May through September, The Schwabenhof Pavilion is open at 4pm, serving an array of German Beers on tap. You can also enjoy an authentic Hungarian bratwurst, Bavarian pretzel or delicious leberkäse sandwich. All accompanied by live music!

Third Space Brewing was founded with a passion for great beer coupled with a desire to create a space people would love to spend time in and they accomplished it! Not only is the taproom welcoming with a cool industrial vibe, the beer garden space has tons of seating and is a frequent stop for food trucks. Plus, they enjoy watching big games projected against the wall. Brought to you by The Lowlands Group, the newest beer garden in town is the Tosa Village Beer Garden. Located in the heart of Tosa, the beer garden will be centered between Café Hollander and Café Bavaria in the Tosa Village, overlooking the Menomonee River. The beer garden will serve a variety of drinks including international and domestic craft beers, as well as wine and cocktails. Their food options will include all of the traditional Milwaukee foods – sausages, hot dogs, pretzels, cheese curds and more! The new beer garden area will be separate from Café Bavaria and Café Hollander and will feature a casual counter service and traditional family-style beer garden tables. The Tosa Village Beer Garden is set to open in mid-June.

The Whitnall Park beer garden will feature 24 craft beer tap handles, food, non-alcoholic beverages, and live music on Friday and Saturday evenings. The beer garden will feature 12 Sprecher beers and hard sodas on the Sprecher firetruck. Patrons who bring their own glassware (pints or steins) will pay refill rates and souvenir beer garden steins will also be available to purchase. In addition to the beer, a variety of food options are offered at the Gift of Wings grill.

Whitnall Park Beer Garden will open from 4PM to 10PM on Wednesday to Fridays and 11AM to 10PM on weekends. Last call will be at 9PM.

MILWAUKEE COUNTY PARKS TRAVELING BEER GARDEN
The Milwaukee County Parks Traveling Beer Garden™ tour has two, simultaneously running, tours traveling throughout the Milwaukee County Park System thanks to the partnership with Sprecher Brewing Co., Inc.  Each of the stops on the 16-week tour features craft beer and gourmet sodas.  There will also be live music featured at all stops Wednesday through Saturday evenings from 5PM to 8PM. Hours are Monday through Friday from 4PM to 10PM, Saturday, Sunday and Holidays from 11AM to 10PM with last call at 9PM.

Pass Me a Pint Tour:

Roll Out the Barrel Tour:

New in 2019, the Roll Out the Barrel Tour will also feature a daily food selection from Iron Grate BBQ, including smoked meats, brats, polishes and pretzels.

For all of you runners out there, the Traveling Beer Garden also features a 5K run series. The series takes place on Thursday evenings, starting at 6PM. The cost is $30 per race or $150 for the season. Each runner receives a t-shirt and pint of beer (or root beer) after the race

The Traveling Beer Garden’s hours are from 5PM to 10PM, Mondays through Fridays, as well as 11AM to 10PM on Saturdays, Sundays and holidays, with last call at 9PM.  Live music performs Wednesdays through Saturdays from 5PM to 8PM.

EAGLE PARK BREWING COMPANY POP-UP BEER GARDEN
One of our favorite beer gardens from our 2018 Beer Garden’s Guide is going mobile this year! Eagle Park Brewing Company will be setting up a traveling taproomat a series of parks in New Berlin this summer. The pop-up beer garden will be open Fridays from 4PM to 9PM and Saturday and Sundays from 12PM to 9PM.

RAISED GRAIN BREWERY POP-UP BEER GARDEN
For our Waukesha-area mamas, Raised Grain Brewery is setting up pop-up beer gardens at Waukesha County parks this summer. All of the pop-up locations will be open Thursday and Friday from 4PM to 9PM and Saturday from 3PM to 9PM. Check out the full schedule below and be sure to head to their website for more details. 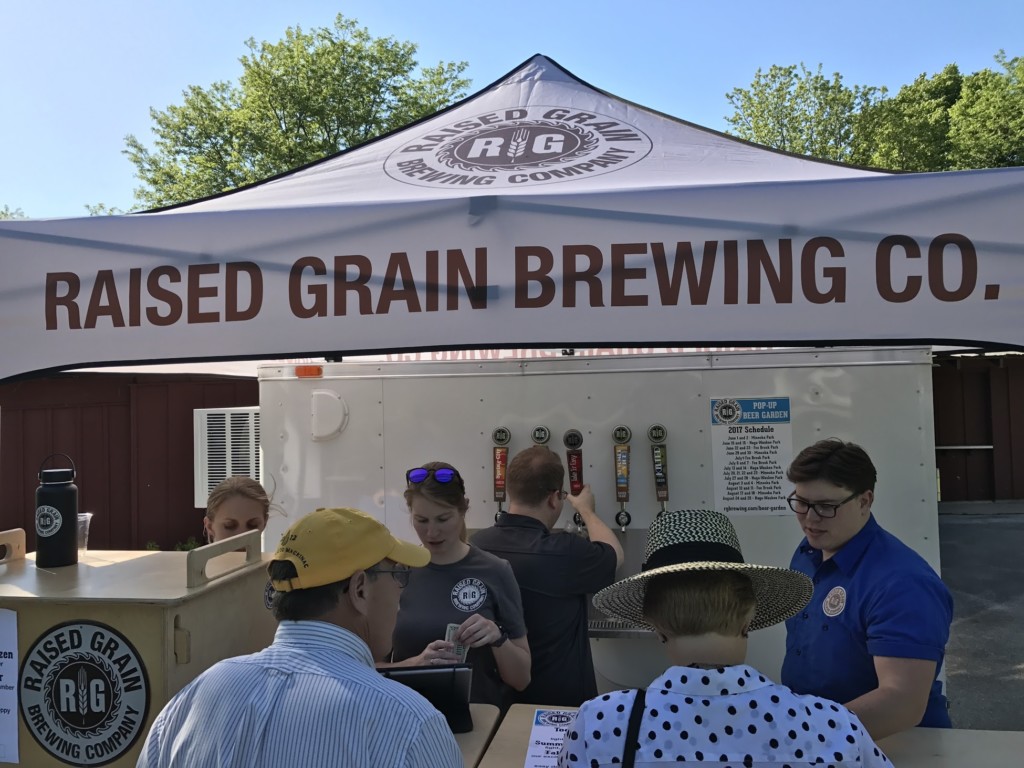 SUSSEX PINTS IN THE PARK BEER GARDEN
New for summer 2019, the Village of Sussex will be hosting traveling beer garden at four of its local parks. The beer garden will feature beers from Brewfinity Brewing and a rotating selection of food trucks. Consider walking or riding your bike and get $1 off your beer!

We hope to see everyone out at one of these many local beer garden’s this year! Make sure to grab yourselves a seat at a family-style picnic table, sip on a local pint and enjoy a classic Bavarian-style pretzel for a true Milwaukee Beer Garden experience! I promise, you won’t be disappointed.

Be sure to share your other favorite Milwaukee beer gardens with us in the comments so we can make sure they get added to our list! Karri - May 29, 2020 3
There’s no denying that Wisconsin has a lot of great land to explore, but did you know that the metro Milwaukee area boasts some...