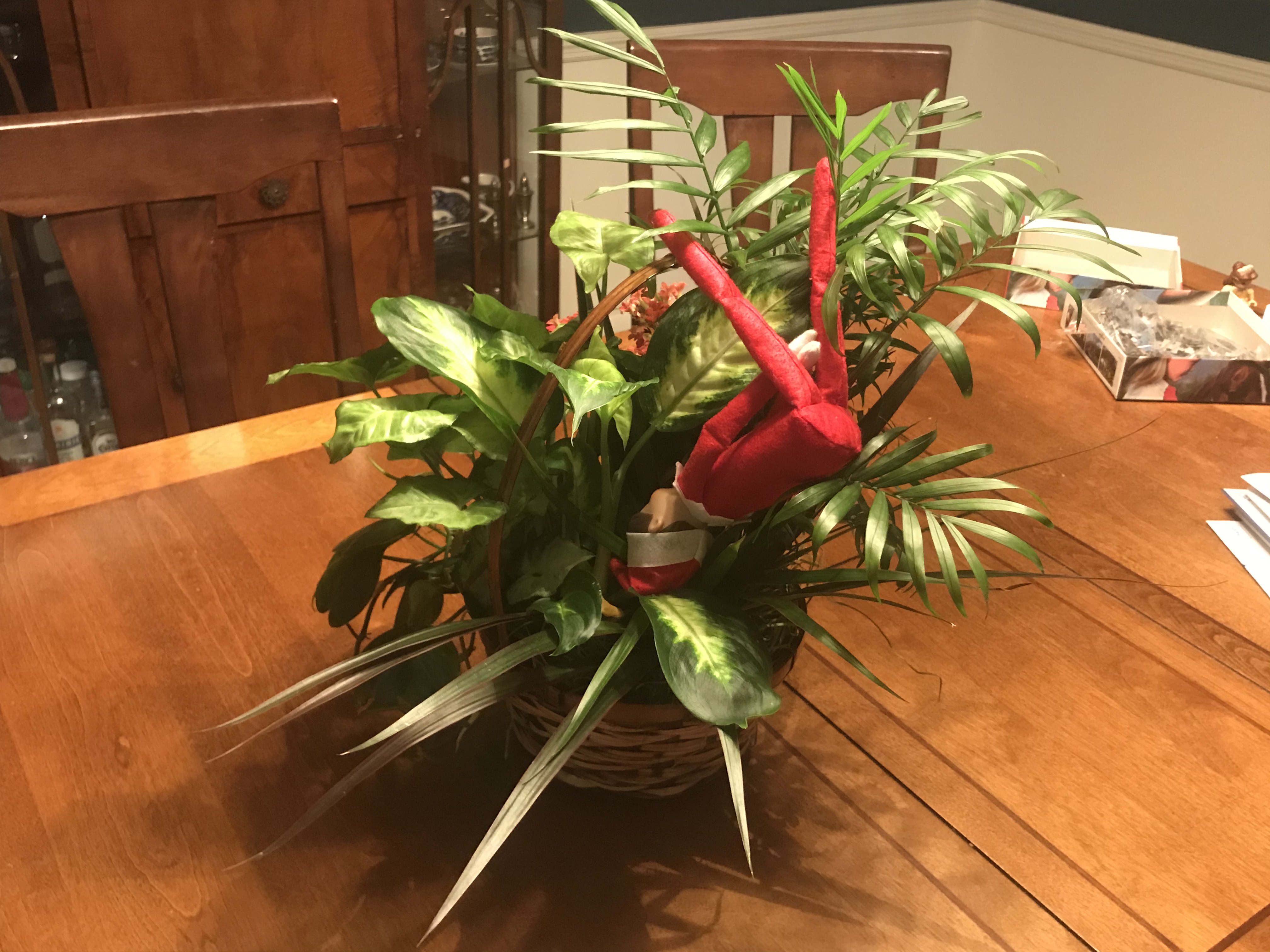 Elf on the Shelf was something I was going to excel at. Our Elf was going to be funny, clever, and constantly showing up in the most inventive places. Then we actually got one, and it’s been downhill ever since.

If you’re looking for Elf-in-a-marshmallow-bubble-bath or Elf-in-a-Barbie-car-Indy-race ideas, move on over to Pinterest, they’ve got some great stuff. But if you’re needing some ideas for when your Elf on the Shelf has been discovered bottoms-up in a houseplant for a full 72 hours, I’m your girl.

I mean, is it even December if you don’t wake up your spouse at 1 am and ask them if they remembered to move the Elf? This is the month I most often play my “I birthed our kids, so you can certainly get out of bed to move the Elf” card.

The trouble for us starts the day we decorate for Christmas. Every year when I’m packing away the holiday decorations, I think up the very best place for Bing (we named our Elf after Bing Crosby) to spend his off-season–somewhere he’s sure to remain undiscovered. I’m so thorough in fact that even I cannot discover his whereabouts when we pull the decorations out the following year.

So imagine my surprise last year on the Saturday after Thanksgiving when our oldest casually said over breakfast, “Bing ate all our cookies.”

My immediate thought was, “No sweetie, Mommy ate all our cookies…” but she went on to say that she’d opened up the holiday cookie tins that we’d gotten out along with our decorations and had found dear old Elf on the Shelf in one of them. I froze with my coffee cup halfway to my mouth.

“Did you touch him?” I asked, “because you know his magic might go if you do that.” Secretly I hoped she had, because if his magic went, then maybe that could be it for his stay with us this year.

“That’s a good question,” I told her, and then before I knew what was coming out of my mouth I added “I bet he wrote us a note to tell us, though!”

“Where is it?!” she was looking at me with great anticipation.

“Good question,” I scrambled. “Now finish your breakfast, Mommy’s just going to go to the bathroom quick. With this pen and paper.”

And that’s how I discovered the trick that has saved Bing’s magic for my kids countless times:

Notes from your Elf on the Shelf are your greatest asset.

When they don’t have to hunt for the Elf because he hasn’t moved, they do get to hunt for the note he left us to explain his immobility. While they’re searching, I have time to quick scribble something out of their sight. In this case, Bing explained that he missed them so much he’d come early, and that he’d curled up for a nap in the cookie tin because it smelled so good.

Later in the season, Santa himself would send notes to explain that Bing had been given instructions to return to the same spot he’d been the day before because it had been such a good place to keep an eye on the kids.

You can even go so far as to wrap a toilet paper cast around his leg along with a note from Santa explaining that he was injured on his return trip the night before, can’t move for the rest of the season and henceforth will be communicating with Santa via text message.

Now, if you’re looking for a good place for an extended Elf stay, I can’t recommend the candy jar highly enough. 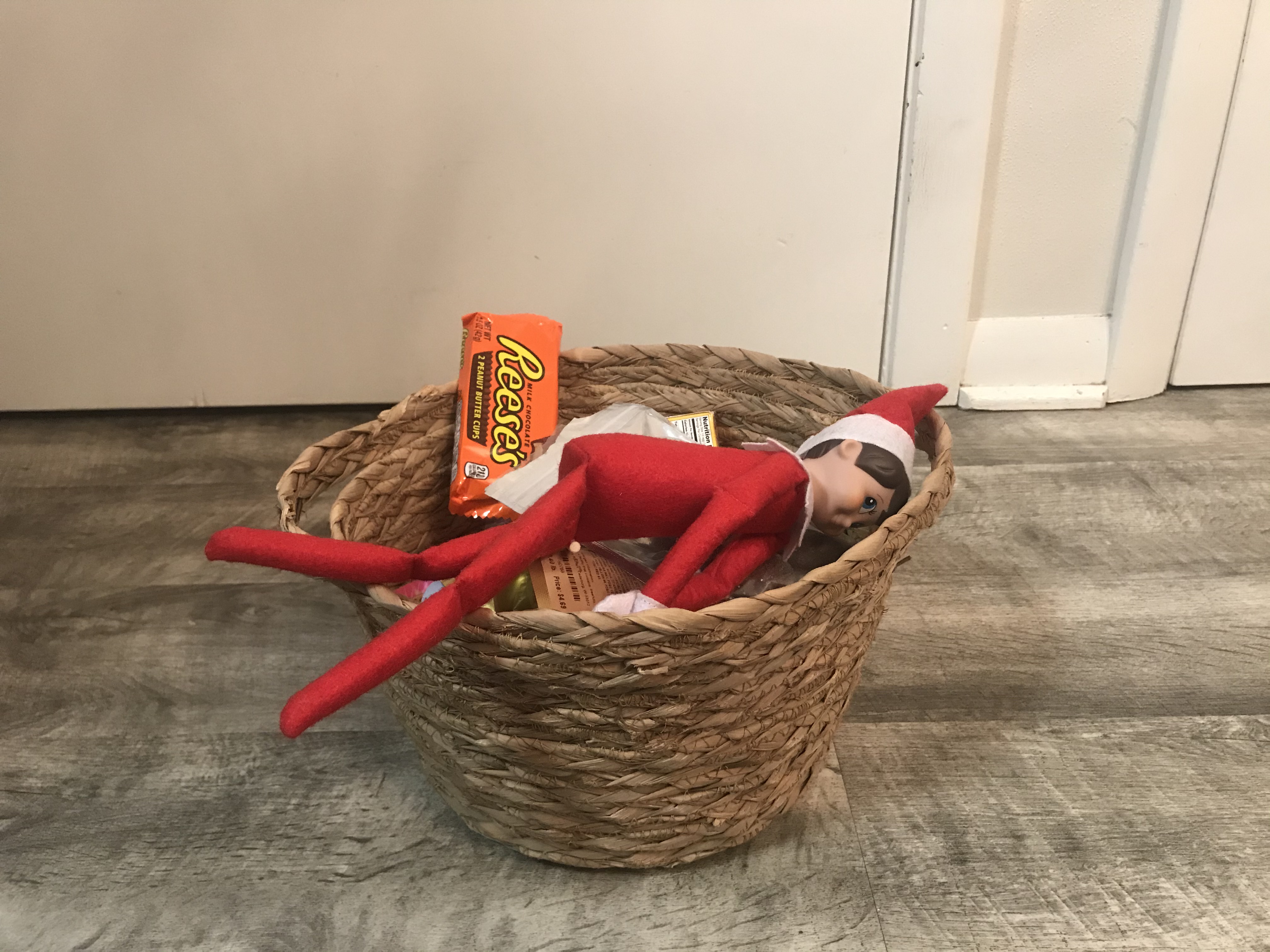 Bing ended up in our candy basket quite by accident, but it ended up working to my advantage. This particular morning I heard my kids’ mad descent of the stairs around the same time I noticed that Bing had not moved from his perch on the chandelier. Our candy basket happened to be on the floor, where I’d been rifling through it for my breakfast, so I quick flung him in there.

The kids thought it was hysterical, but the real added bonus was that since they knew they can’t touch him, I didn’t get a single “Can I have a treat from the candy basket?” for the whole day. I loved it so much that the next day he set up shop in the M&M jar and the day after that in the cookie exchange tin.

This year I hope he plans to dive headfirst into the box of Cinnamon Toast Crunch for the entire month of December.

Anyway, my point is, don’t beat yourself up over Elf on the Shelf.  For starters, you can’t be worse at it than I am. But second:

There is so much pressure this time of year to do all the things, and to do them well. But sometimes you end up having the most fun with the things that don’t go quite as planned. Home Alone With My Kids